January's Birthstone is the Glorious Garnet

The American Gem Society has selected the garnet as the official birthstone of January. And here at Diana Jewelers in Liverpool, NY, we feel there is no gemstone more perfect for welcoming a whole new year.

The History and Significance of the Garnet
The garnet is a gemstone said to signify eternal trust and friendship. The word from which our modern day "garnet" is derived is the Latin granatum, which references a pomegranate seed.

In fact, the pomegranate itself shares more in common with the garnet than its traditional rich red color. Pomegranates have been culturally prominent for centuries as a sign of prosperity and abundance.

The first reference to the gemstone called the garnet was found in 3100 B.C. from ancient Egyptian culture. The Egyptians referenced the use of the beautiful garnet stone in their jewelry. Today nearly all garnets are sourced from exotic locales such as Sri Lanka, Africa and India and find their way into beautiful settings such as this piece:

The Healing Power of Garnets
There are many gemstones that are thought to promote healing. Often, a specific gemstone will be lined to specific disorders or parts of the body. The garnet has been linked with friendship, love, romance and fertility as far back as the ancient Greeks and Egyptians.

All the Colors of the Garnet
While a deep, vibrant burnished red color is the color most commonly associated with the gemstone known as "garnet," in actuality garnets are mineral-based gemstones that can take on many colors.

The Gemological Institute of America (GIA) encourages buyers to use color as a primary source of guidance when understanding the natural variances of the garnet. Because of this color variation, garnets are often included in jewelry such as this lovely piece: 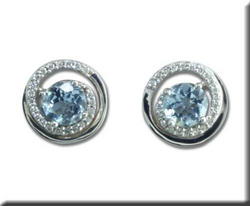 Here are some garnet common color variants and the names used to refer to them:

- Pyrope. Color ranges from deep purple to a lighter red. Rhodolite is one of the most popular Pyrope derivative colors.

- Almandine. Color ranges from a very bright red to a more orange-red tone.

- Andradite. Color ranges from green to yellow-green. Demantoid is a popular derivative of Andradite.

- Grossular. Color can range from nearly clear to yellow, orange, red and bright green. Tsavorite and Hessonite are both derivatives of Grossular.